For more than 30 years, J. Dubs has been crafting quality metalwork products while offering the best warranty and finest customer service. We are proud of the many items we have shipped over the years, and we’d like to thank all our customers for their loyal patronage.

J. Dub’s is owned and operated by Jerry Wayne Bement, a native of Tulsa, Oklahoma, who first moved to the Pacific Northwest in 1975. Before that, he served in the U.S. Air Force as an electronics specialist, traveling almost continuously until age 30. He later moved to Wyoming, and one day a horseshoer drove up to his cabin in a Cadillac with a good looking woman seated next to him. “He can go anywhere and still make a living,” Jerry said to himself. Right then and there, he decided to try horseshoeing, and after an apprenticeship, he moved to the Pacific Northwest to start shoeing both show and rodeo horses.

Horseshoeing, of course, is where Jerry learned the basics of forging metal with fire. He eventually settled in the rodeo town of Ellensburg, Washington, and in 1980, he and his good friend Billy Maguire used a coal forge and an oxy cutting torch to create a weather vane featuring a dog jumping over a crescent moon as its design. It was J. Dub’s first commission, and it still flies today atop Dick and Jane’s house across from the police station near downtown Ellensburg. 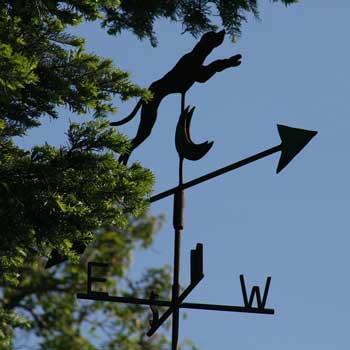 From there, Jerry started making weather vanes for local valley residents by drawing them out by hand, then hand cutting them with the oxy torch before spraying them with black paint from a rattle can. Those early vanes had hand-forged letters, and the images were pretty basic, but they lasted.

Then, in the late ’80s, he saw a plasma torch demonstration. After all those years of using a slow, messy torch with lots of clean up, Jerry knew the plasma torch would change the game, big time. For the next 15 years, he hand drew and hand cut all the products he created. He started selling his work at the Pikes Place Market in Seattle, and he began showing at arts fairs in Aspen, CO, Jackson Hole, WY, Sun Valley, ID, and many others.

Esquire Magazine, Seattle Times, and other media did articles on Jerry and his new type of metal work, and all told, he made some 35 miles of hand cuts before transitioning to the next wave of new technology.

Around 2000 came the affordable CNC plasma table and software that could scan a drawing and cut the image. Jerry felt like this new technology was created just for him. After all, he had been drawing images on steel and then cutting them by hand with a plasma torch. Now all he had to do was draw an image, scan it in to a computer, and export the file to a machine that could make the cuts while he sat and supervised. The down side was that anyone could buy this tool and do what he had been doing for the past 20 years.

That’s why we still hand draw all their images, but now cut everything on a computerized table. We remember how we did things in the old days, and we want to preserve the best of that tradition while taking advantage of new technologies to make the process both faster and better for our customers.

J. Dubs has shipped thousands of products all over the world and is constantly developing new products for homes, ranches, and municipalities. Look over our website to see how we can help you, or come visit us in our new showroom in Historic Downtown Ellensburg, WA. We’d love to show you around. 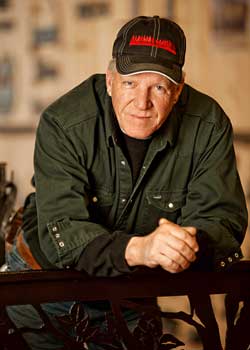 Innovation, Originality, Quality, and Supreme Service for more than 30 years.